I decided not to tweet out during this year’s SSAT as I would have probably filled up your time line.  Instead I’ve put my thoughts and reflections into a post about #Vis2040 about where we may be going as a profession and as an education system.

The massive challenge of Vision 2040 is becoming more and more apparent to those of us who are engaging in it.  It is almost impossible to predict, and maybe even imagine, the detail of education in 2040 but what is possible is to look and attempt to discern a direction of travel.  It is more about identifying the main threads rather than seeing the whole picture in detail.  One of the things I hope will change by 2040 is the clarity about the role and part to be played by central government, the newly emerging and much more diverse middle layer in education - academy chains, federations, multi-academy trusts, teaching school alliances, local authorities - and loose clusters of and individual schools.

Vision 2040 is an idea about how power may shift within the system, over the next twenty five years, what may stay the same so still be familiar ground to us in 2040 and what are the cul-de-sacs we are currently travelling along, leading no-where, that will require us to change direction.

Thanks to the people who presented especially Michael Fullan, Andy Hargreaves, Bill Lucas, Guy Claxton, Tim Oates and David Weston from whom I made the many random notes that this blog and my reflections are taken from.

The New Professionalism will require some reimaging, some movement and some consolidation as we move to becoming a true profession:

This will be a primary focus for those working in education.  High levels of equity are achieved through high attainment for all students particularly those from disadvantaged backgrounds.  Outcomes matter to young people and deeply affect their life chances.  Young people matter to us teachers so outcomes matter to us because they give young people a belief in themselves and a passport to greater opportunities.  This is familiar ground.

This moral purpose is advanced nationally as schools are judged purely on the value added measures with the system, system as a whole, judged on attainment measures.  Schools in challenging circumstances can be considered good and outstanding as well as those in more privileged settings.  Coasting is not allowed by students or schools; we need to eradicate it from the system both individually and collectively.

Ofsted in its current guise has long since gone.  Ofsted is a cul-de-sac, it can’t take us any further and is now doing damage, we’ve hit the point of the sigmoid curve that means we need to change before decline begins.  The main “control factor” has been built into the system early on- only the brightest, most talented and emotionally intelligent graduates are admitted to the profession.  Support is provided for schools by schools, in a newly formed and diverse middle layer of education involving legally integrated schools at a governance level.

Teachers Possess a Body of Knowledge

The teaching profession has a body of knowledge that they “own” linked to curriculum, including assessment, and pedagogy.

The profession is seen as the recognised expert in these areas.  The National Curriculum is considered a ridiculous concept.  Society, via government, has defined an expansive, rich and inclusive view of the end point of education and what it means to be an educated person in the middle of the 21st Century.  The knowledge - factual, conceptual, procedural and metacognitive - associated with becoming an educated person is trusted to the professionals – this is a power shift.  The current knowledge versus skills debate is pointless it’s another is a cul-de-sac, it can’t take us any further and is now doing damage, we’ve hit the point of the sigmoid curve that means we need to change before decline begins.

Teachers as Researchers & Developers and Builders of Knowledge

The profession are laterally integrated with research and development and responsibility for growing the professional body of knowledge a core responsibility of all.  Links with higher education institutions as part of Initial Teacher Training, early career development to a Masters level and on-going support and validation of research findings throughout a teacher’s career are expected and the norm.

Power Shifts to the Learners

The pervasive use of technology will extend the learning day well beyond the school day in a way that we currently don’t have.  The opportunity to learn, not just consolidating and reinforcing learning during homework, but accessing and engaging with others in new learning is now a reality for many young people.  We just haven’t really tapped into this as schools yet.  Technology is the enabler but it is the student who will increasingly be able to co-construct their learning with teachers and others that will see the balancing of the power dynamic in a learner’s life.

Certain dichotomies have been lost from the debate.  The most corrosive are currently knowledge versus skills, university versus school based training and development for teachers and accountability versus responsibility.

We are moving towards a system where teachers and schools will be more responsible for the quality of education in a self-improving school system.  Schools will increasingly be formally and legally linked at a governance level that embodies “we are more powerful together than apart” and “your pain is my pain, your gain is my gain” thinking and acting.  System leaders and chartered teachers operate within local families and clusters of schools who are responsible for “all our children”.  When working in localities we are more easily able to define and relate to who are children are.  Networks collaborate with networks to capture, share and use knowledge to improve practice.

I still believe that schools will be physical buildings.  The socialisation and social care of children and young people should and will form part of what we expect from schools and the education system.  Modelling the building of right, enriching relationships is an expectation of the system and the ability of young people to do this is a required outcome.

Final thanks to Sue Williamson and the SSAT for organising the conference and leading the debate. 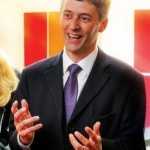 In September 2013, Stephen became the Executive Headteacher of a Blackpool federation. He is one of SSAT’s long standing advocates and his contribution to the early System Redesign and Four Deeps research is valued highly.